A visit to a nearby observatory sparked my interest in Astrophotography – taking pictures of the heavens. This is a rewarding hobby even for suburbanites but requires some equipment and expertise.

With some effort, one is definitely rewarded with stunning “self-made” images of stars, giving one a new perspective of what is up there in the sky as well as the satisfaction of being a “citizen scientist”.

My initial inclination was to purchase one of the many telescope offerings in the sub-$1K range and combine that with some DSLR camera accessories and hook it to my Sony camera.

After some research I concluded however, that the telescope-based astrophotography requires some fairly decent equipment to be frustration free – primarily an auto-calibrating tracking mount with solid PC interface and a camera that can be controlled from software as well as a DSLR camera interface. My Sony A6000 was unfortunately not very astrophotography-friendly, as it does not provide good integration with any of the control-software programs without hacks. So, without spending at least $2-3K into stuff, this would likely have been a short lived hobby.

A good option for a beginner is therefore a much cheaper setup: simply use a camera + zoom lens combo that many (including myself) already have. Long-exposure images with a zoom lens of 3 seconds or more requires the following additional equipment at a cost of about $500.

Additional accessories that I also purchased were:

The final image was created using some free or open-source software:

In preparation of taking actual images, one needs to get beyond the “point-and-shoot” usage and learn the ins-and-outs of the camera controls, since everything will be configured manually when taking images. Specifically one must be familiar with:

The second learning phase involves the other equipment; one needs to get specifically good with the setup and calibration of the mount as well as attaching the camera.

Let’s assume the equipment is ready and you find yourself in a place without too much light pollution on a clear-sky at night. The actual image acquisition run over a 30 min-2 hours period and proceeds as follows:

Now that one has collected images, it is time to process them and produce the final combined output to admire, analyze and share with friends and family.

Below are some of the results (click image to zoom in).

The “1st light” shot was taken next to the house in less than optimal conditions showing only a few stars, a lot of noise due to the high ISO setting, and comes with some clouds and the neighbors roof it it as well. 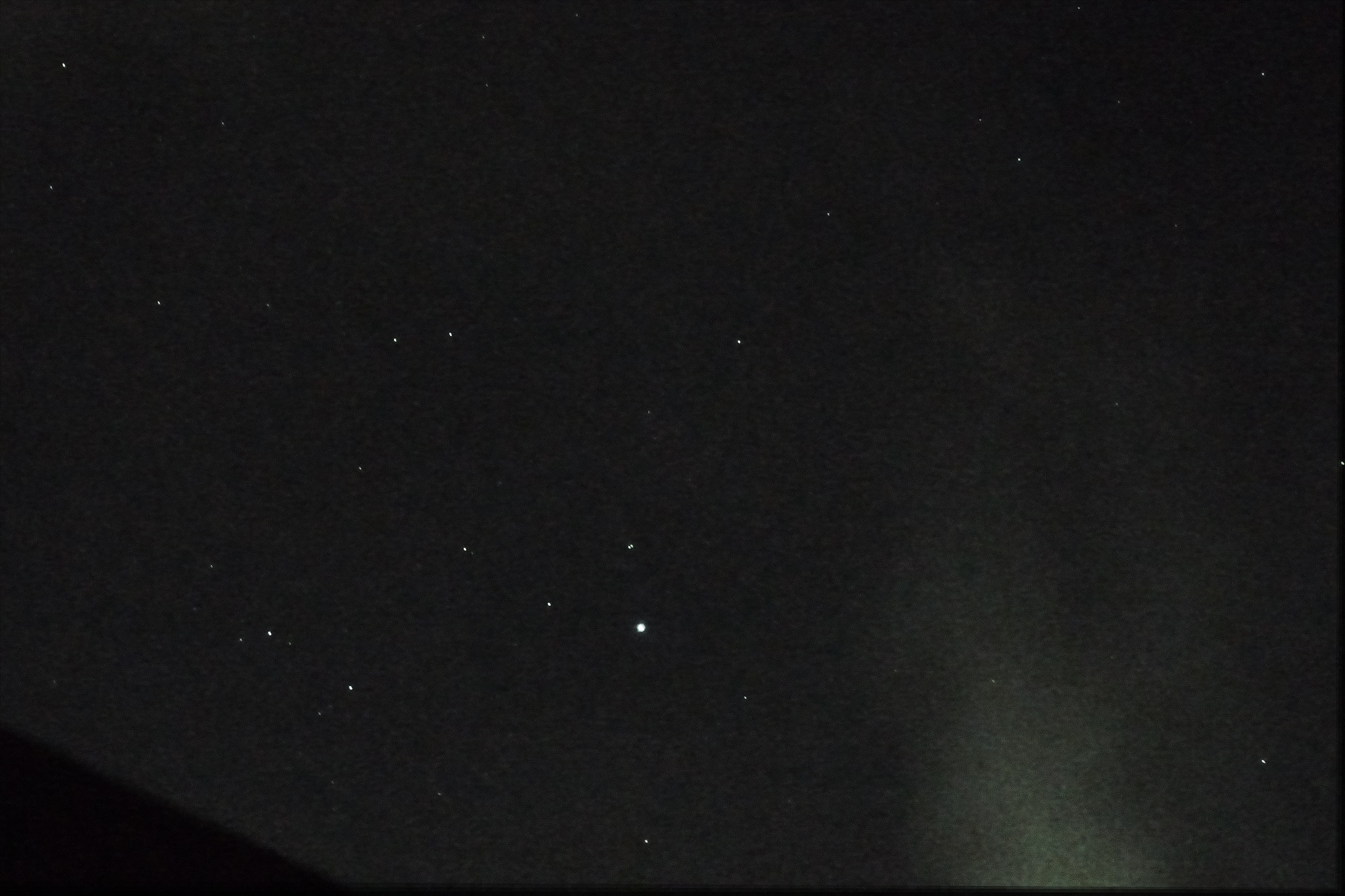 The 2nd attempt used a much lower ISO, better calibration and over 30 stacked images to get some nice contrast. 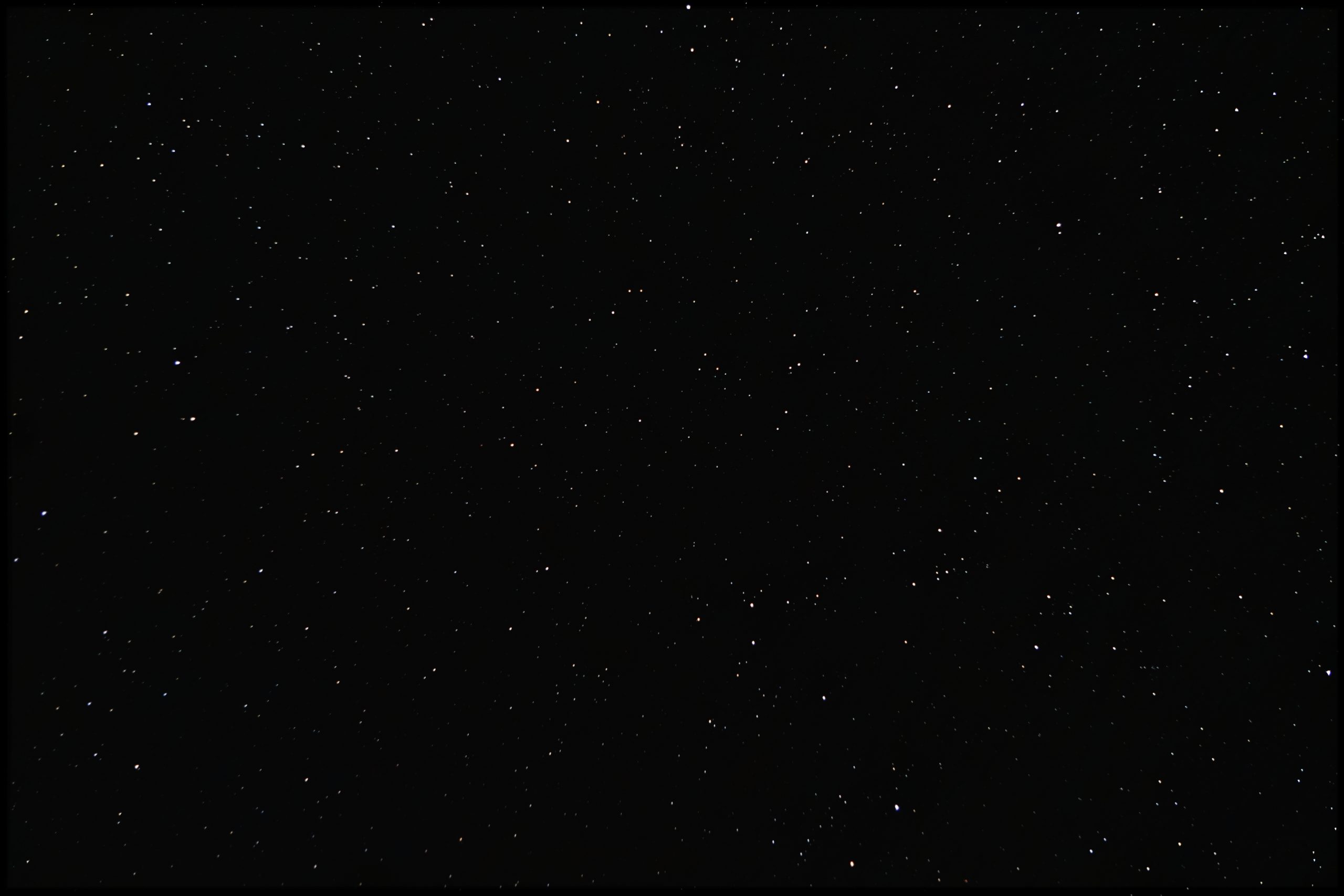 The 3rd test shot was trying to capture the milky-way using a higher ISO setting. It is visible as vertical band, but at the expense of quite a lot of overall image noise. Also clearly visible is the darkening effect at the edges from the cheap bundled zoom lens. The 4th test shot has some nice detail as well as color, but the light pollution bleeding in from the city forced a contrast increase during the post-processing so the lower right isn’t washed out, lowering the amount of stars visible in the image. The 5th test shot was a bit of a graduation image for my hobby and shows Altair – a bright blue sun. Due to the clear spectral signature of the star and its surrounding bright stars, it was easy to locate it in Stellarium. 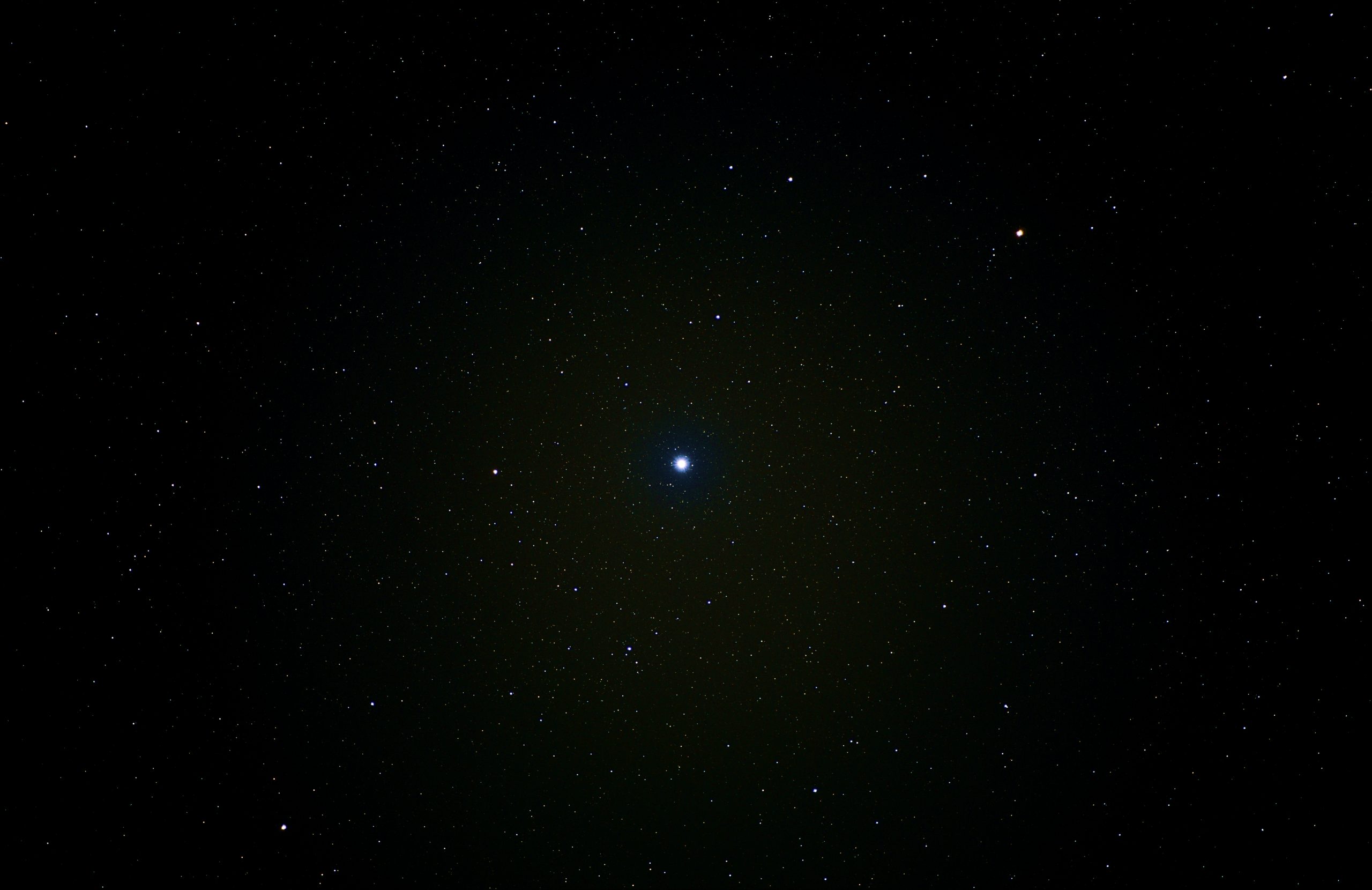 The final and 6th image in the “test series” is a repeat of the previous light-pollution shot, but still quite detailed when zooming into the darker parts. 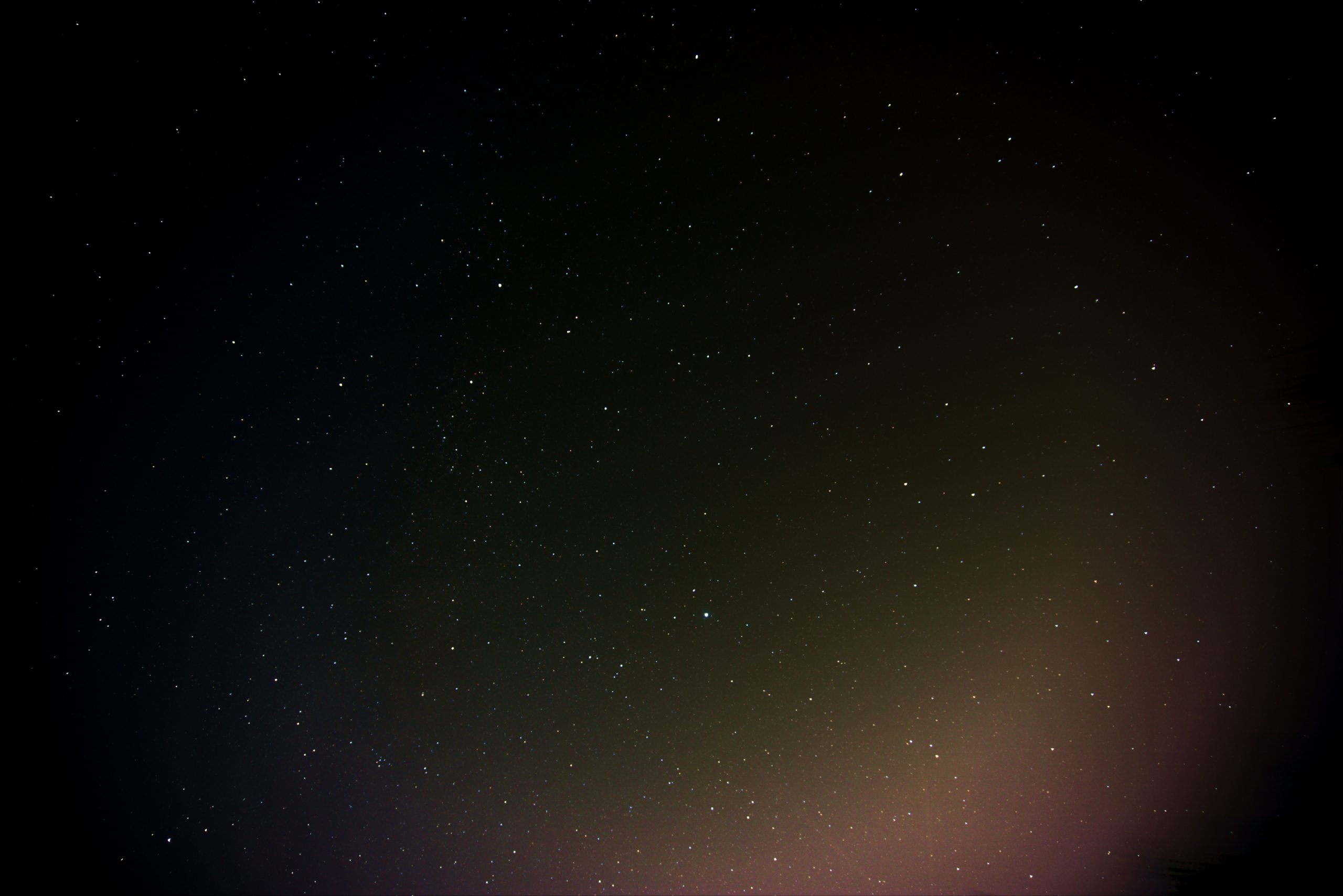 The next set of images were taken in Ottweiler, Germany during the winter while I was on vacation.

The following is a shot without the zoom lens and thus a 15deg wide angle shot with a hint of the milky-way and some nice tree branches for perspective. Note the bright cluster of stars in the middle right – it looked like a smear to the naked eye, but was easily resolved into individual stars with the camera. 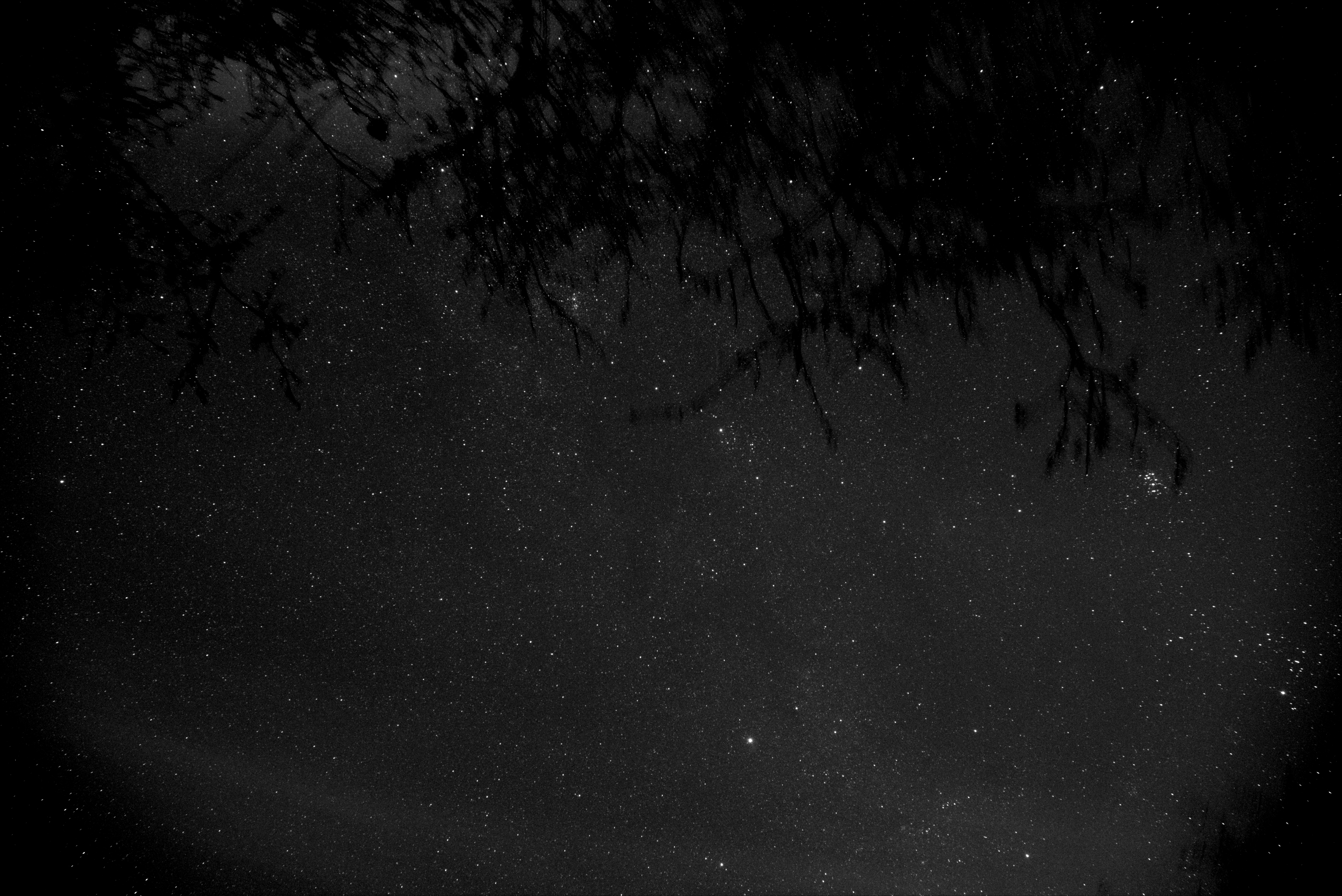 Zooming into the cluster mentioned before, it turns out to be a group of bright blue suns about 300 light years away. 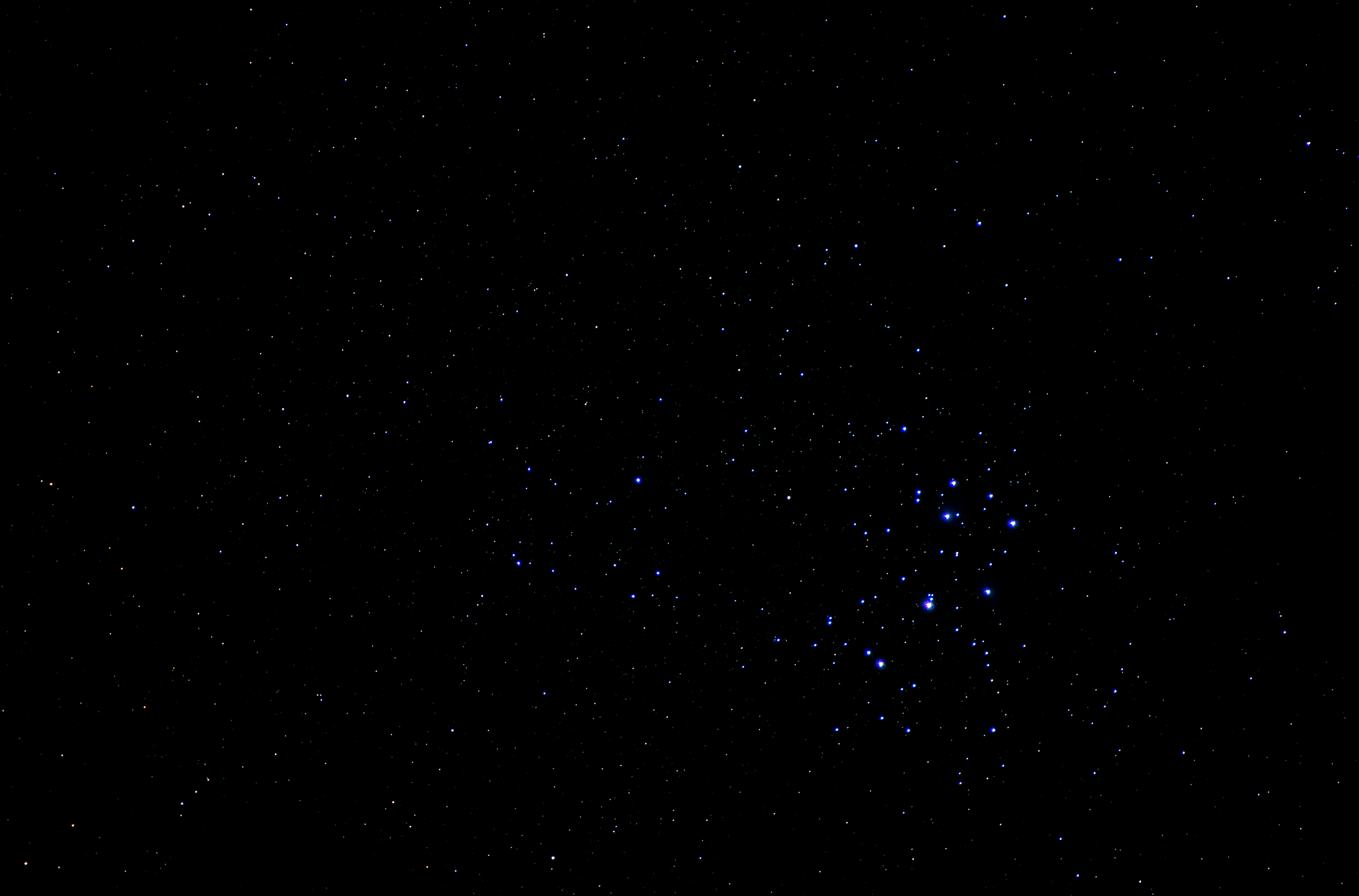 Pointing the camera straight up and into the milky-way reveals a great mix of stars. 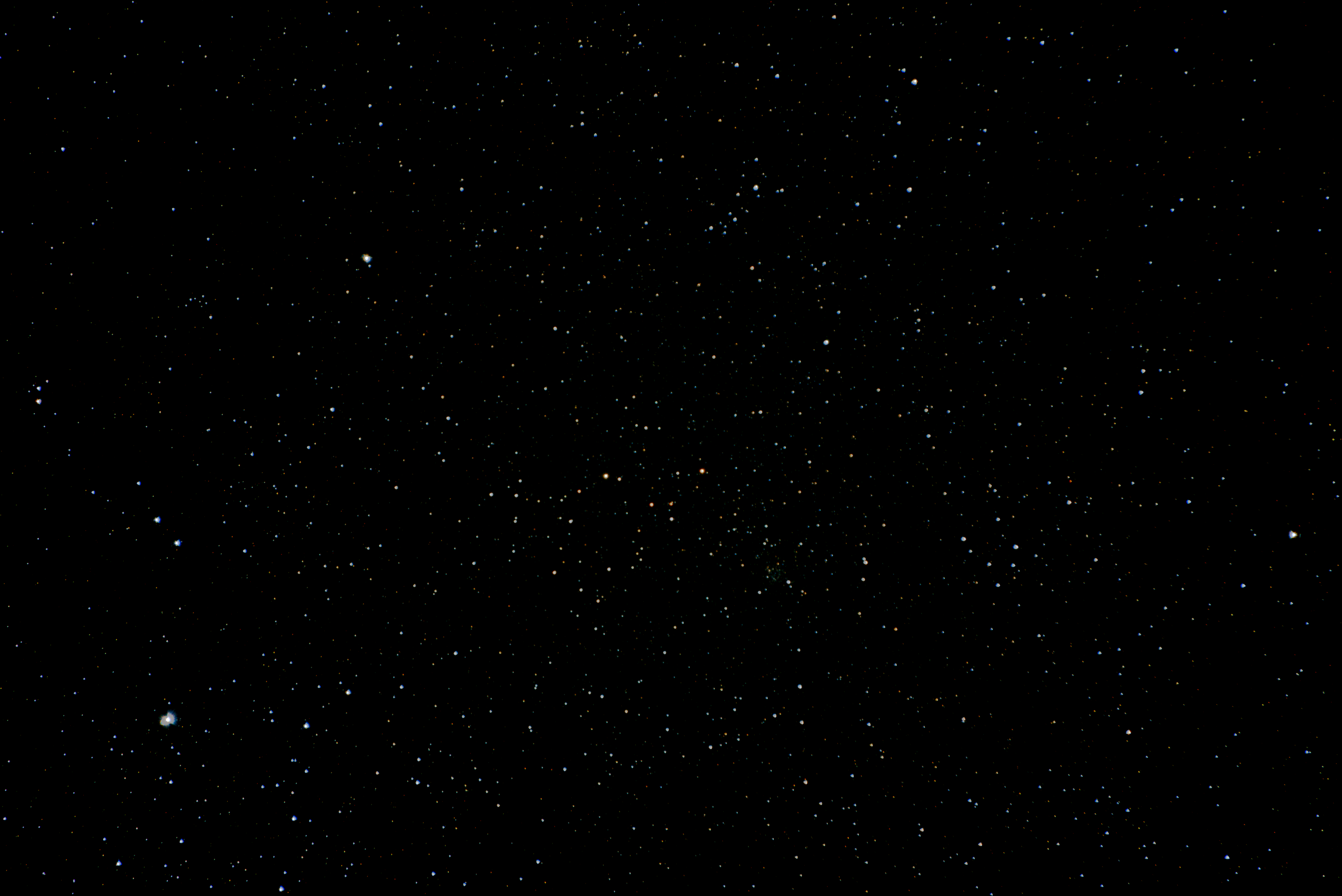 Stellarium showed the possibility to image a small nebula with a field of view of about 3.5 degrees of the zoom lens, so the next image was taken by pointing the camera into the approximate position of the sky … and the nebula shows up. 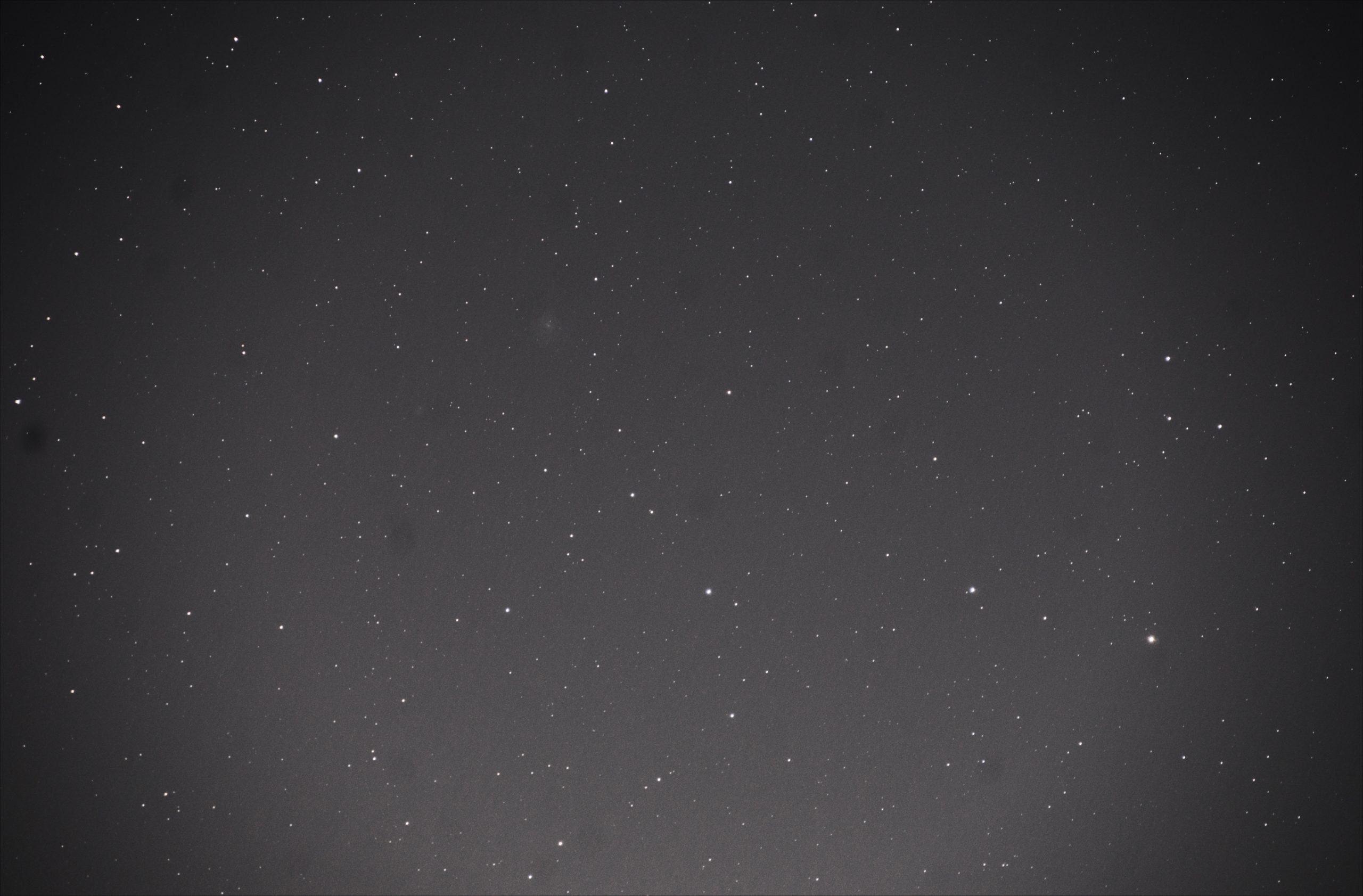 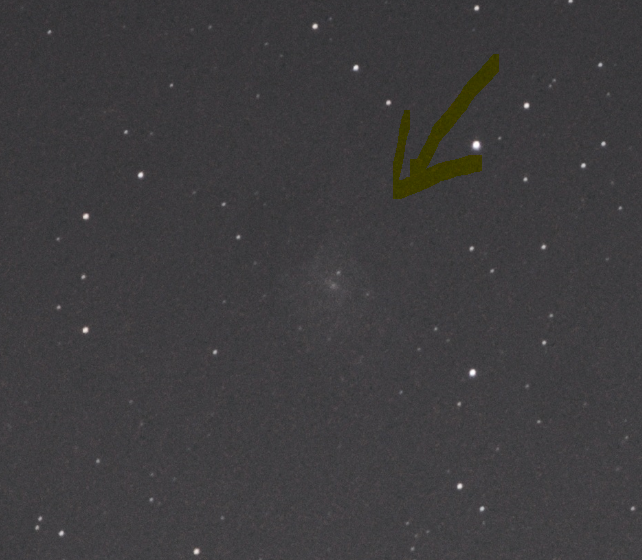 The final shot of this series was taken in cold and clear conditions with low ISO and 100sec exposure by focusing carefully at a bright central star. It reveals a lot of details including nebulae and clusters. 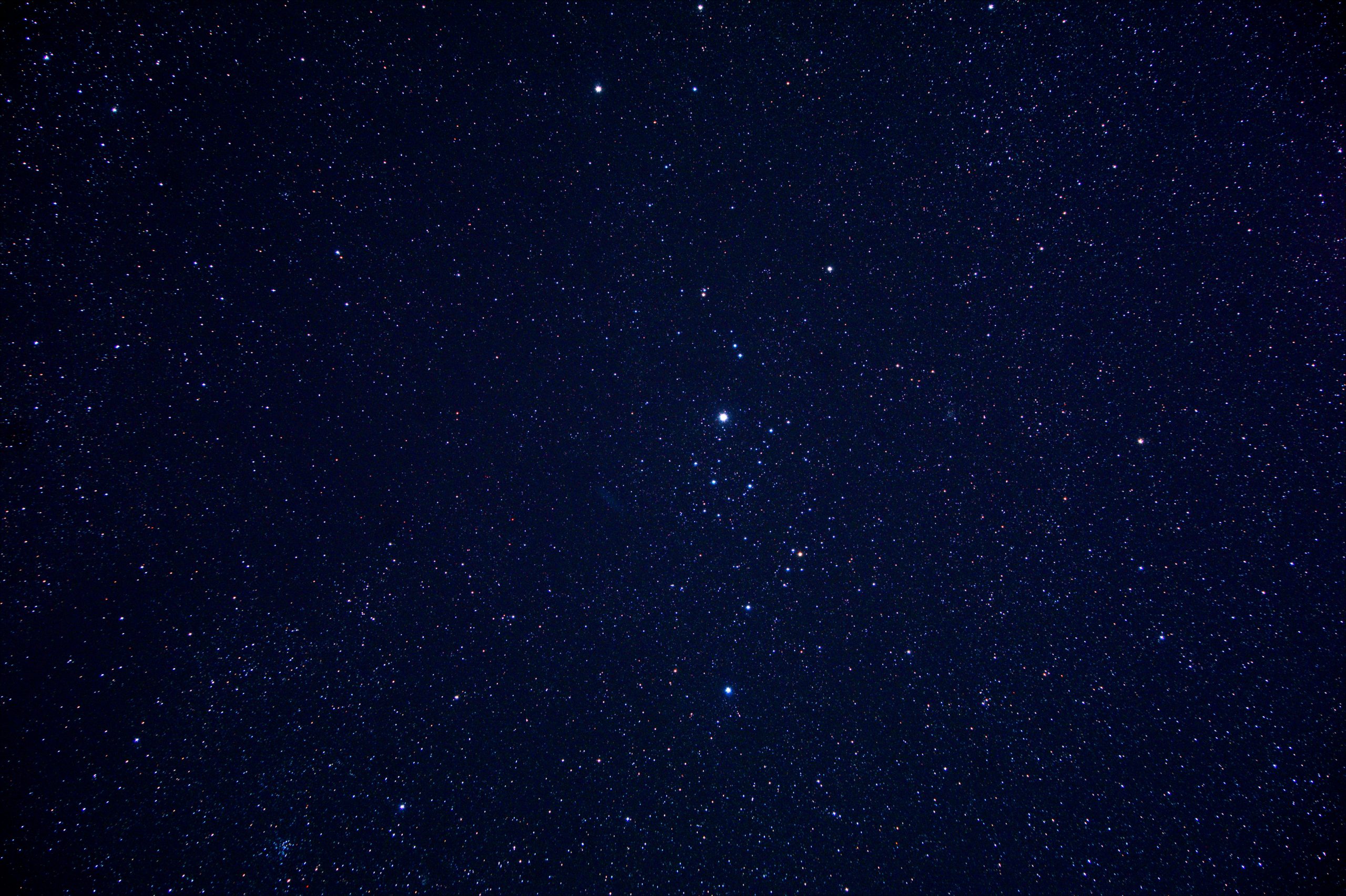 The astrometry.net web service can be used to locate any star image on the “map” by uploading it for analysis – which revealed that I had taken an image of the constellation Perseus. 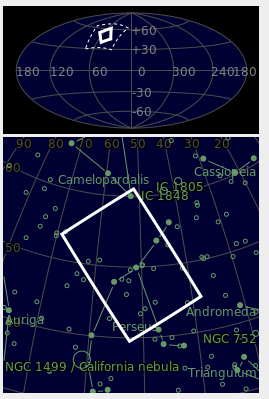 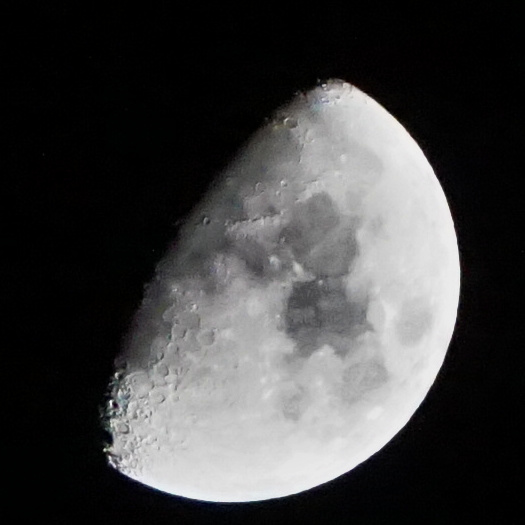