This is a collection of various media art projects that I participated in, created myself, or was involved in while I was at the ZKM,  or at a later time when I was doing freelance work with various folks. 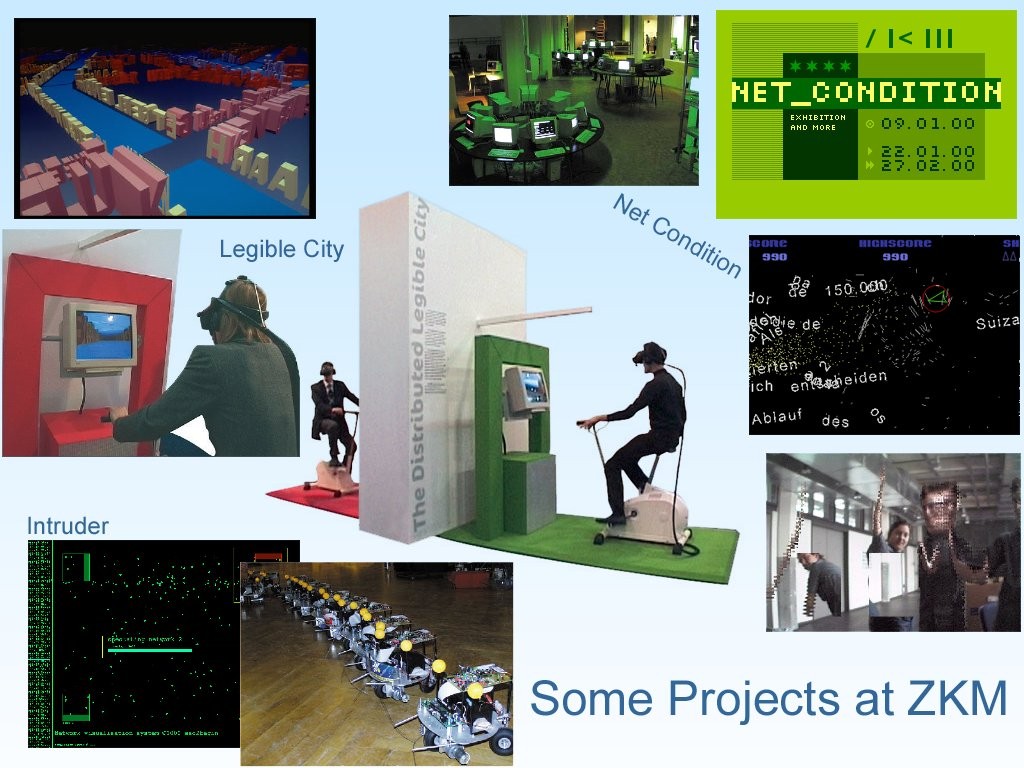 The tracking hard- and software was designed an implemented by me. The system used a IR beam generated at a particular frequency via the Sound-Card of a PC. Multiple IR LEDs are driven by an audio amplifier. The Robots have IR receivers with two independent Tone-Decoder IC on board. Using multiple different audio frequencies, the PC can generate specific trigger sequences received by the robots. The trigger sequences turn on ultrabright, red LEDs arranged in a triangle shape. A video camera with red-filter images the scene and determines the location and direction of the triggered robot from the image. The information is made available via a TCP/IP interface to the control software. Building the Robots at the ZKM Operating the Robots at the Weimar Show

An extension of J. Shaw’s “Legible City” was implemented by me at the ZKM. The new hardware was designed to be using PCs (to keep costs down) and 3Dfx’s SLI Voodoo2 video cards (the best at the time) to replace the aging SGI infrastructure. The code-base was rewritten as an OpenGL based program. Extensive audio communication capabilities were included via a custom hardware mixer that was controlled via a central server. The audio signals were to come from special Modems with an audio&data channel. For this virtual architecture installation, the libbgrab library (multithreaded framegrabber lib for bt8x8 chips under Linux) was interfaced with some alarm mats under a carpet via the parallel port triggering live-video or still-video in bands from a camera.

The installation of this system was presented by Shuichi Fukazawa.

I set up some of the server infrastructure to gather and distribute information during the ZKM opening event Global Bodies. One of the interface elements was a pseudo video stream, a sequence of images coming from a FTP upload server and presented in Netscape for any visitor.

J. Birringer from Houston writes “… the image streaming on the ZKM website worked perfectly …”. A simple but robust script based CGI setup and a solid Linux installation made that possible.

The system kept serving images throughout, but the server load crept up to 25 from time to time … serving thousands of concurrent external visitors (rather than only the intended GlobalBodies participants) was too much for our Pentium 200 box … who posted that URL publicly?

A CD-ROM features most – if not all – the material that was gathered on the ZKM Server on the 18th and 19th of October 1997 during the Global Bodies Event.

Some of the interesting questions posed at the event to participants:
1. Are our eyes our Targets?
2. Do we become what we see?
3. How do you think technology will change our body?
4. How many personalities do you think you have inside you?
5 Are sounds born, do they also only spend a lifetime in certain places and then die?
6. Are we already Cyborgs?
7. What is the difference between genetic memory and cultural memory?
8. How do you think it would feel to be touched throughout the network?
9. What percentage of your being is connected intimately with technology?
10. Can the human Body be an interface?
11 How do we determine whether an entity is conscious?
12 Is intelligence the allowance to decide what it considers to be useful for itself?
13. Do you fear Machine Intelligence limiting your free will?
14. How does the constant use of technology effect our thought processes?
15. Which is worse for you….alone in a room with Email or a room filled with people but no Net connection?
16. Do you believe in virtual sex?
17. What is your definition of _Nature_. A few things have to be mentioned:

To start the CD-ROM, double click on the “startw31” or the “startw95” icon, depending on your operating system. You don’t need to have any special software installed, but some parts will remain unavailable if you don’t have Quicktime, DirectX or Netscape installed.

When you start the CD-ROM, you will see an intro that runs in a loop. To go on, press the mouse button. You navigate the CD-ROM by clicking on any red box. Some clickable areas are identified with a hand cursor. To quit, press the escape key or choose quit from the menu. You can return to the interface with the “main” menu button or the “Global Bodies” box. “intro” will run the intro loop

You can find the most recent versions of the required software for Windows 3.1 and Windows 95 in the “install” folder on the CD-ROM.

In order to view the included websites, you will have to install Netscape on your computer. There is no need for an online connection, but some of the material will be unaccessible if you view it offline. The Project was part of the (Artists-in-Labs) AIL Program: Many artists currently explore the scientific, technological and cultural developments of the 21st century and they are engaged in critical and ethical debates. The intention of the AIL program is to share common goals, to broaden the dialogue, generate ideas and raise awareness of the contributions both artists and scientists can make to the larger challenges of our time.

The goal of this project was to build a set of artifacts for an interactive and collaborative installation that mimics aspects of human somatosensation. By this way a fundamental form of bodily experience is brought into an interactive system. 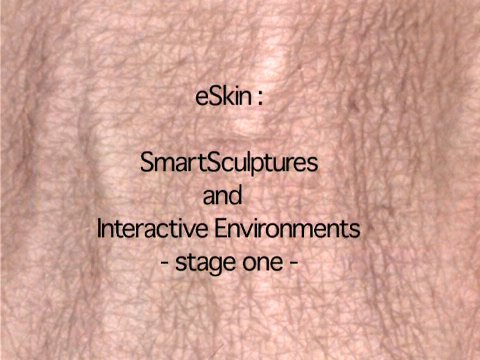 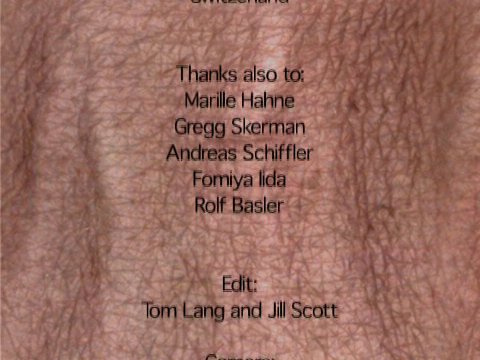 Design and programming of three wireless interface-prototypes. Each interface possesses a surface that is sensitive to pressure, vibration, and temperature. Users interact with the sculptures by touching and carrying them around. Tracking and sensor information is distributed to several different computers that transform user interaction into visuals and acoustics, creating a collaborative synesthetic experience.

Prototype development aimed at building both functional and design models of a wearable and ergonomic interface which helps in navigating complex environments and obtaining information on objects present therein. 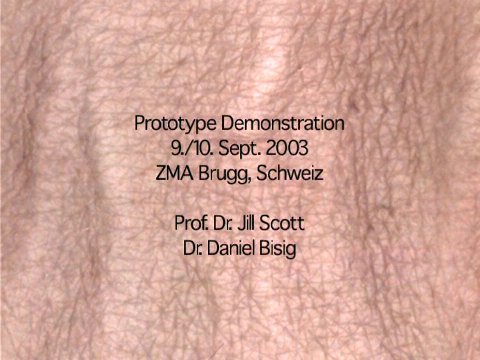 During the time preceding the KTI feasibility study, a portable e-Skin interface prototype was developed by the project partners. This early prototype allowed us to study how the skin based modalities of touch, vibration, temperature and proprioception could be sensed by an interface and how these modalities could be used to control multimedia environments. In order to explore how this interface could be augmented into a navigation and information aid for visually impaired and normal people, a further prototype development phase was undertaken during the last months of this feasibility study.

This prototype development phase aimed at building both functional and design models of a wearable and ergonomic interface which helps in navigating complex environments and obtaining information on objects present therein. The two most important requirements which had to be met by this interface prototype were:
– provide feedback through modalities which are particularly useful for visually impaired people
– integrate and rely on technical infrastructure which will eventually become predominant in public and private spaces

Future Bodies are nomadic text- and visual-based entities, floating in cyberspace, waiting for interaction through the net. These characters, who live in cyberspace, create an interactive, non-linear, net-based hyper drama which the viewer can influence.

The proposal for Phase 2 was designed to bring the paradigm to a wider audience.
View Proposal …

Assistance in the concept and simulation of the “Swarming Robots” mobile projection platform was given for the World Exhibition 2000 in Hannover, Germany. 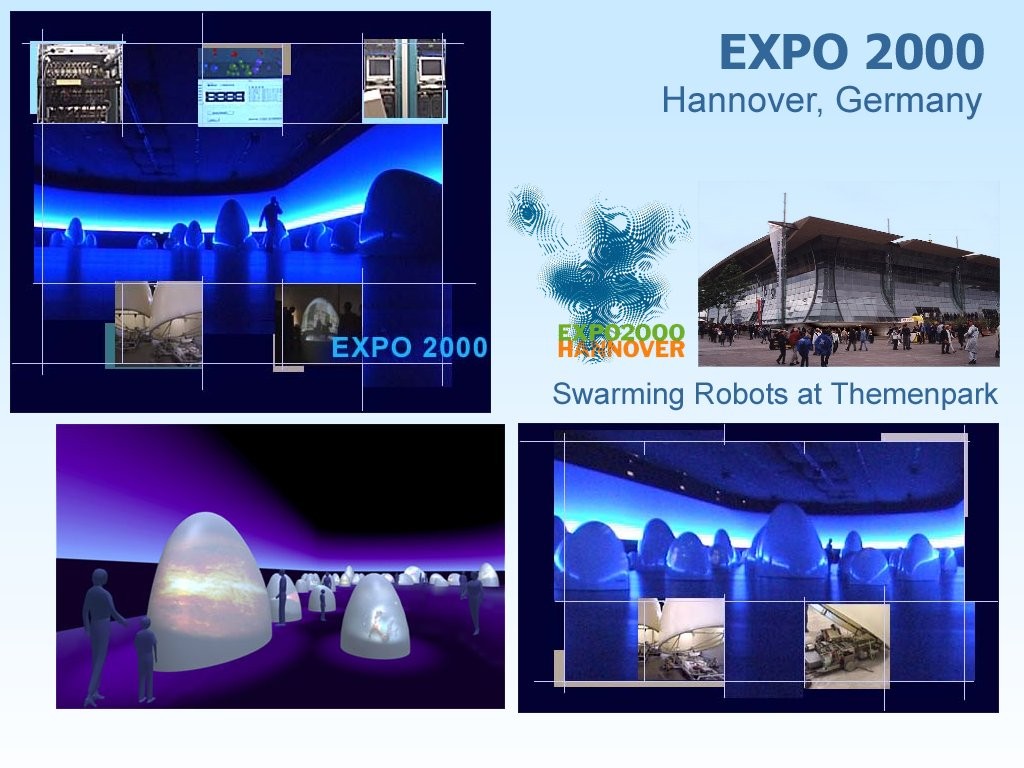 Simulation of autonomous robots and an interacting audience in a hall. C/OpenGL-source and screenshoots.

In conjunction with the well established art group Knowbotic Research, an interactive, force-feedback information visualization was created and exhibited at the Biennale in Venice, Italy. 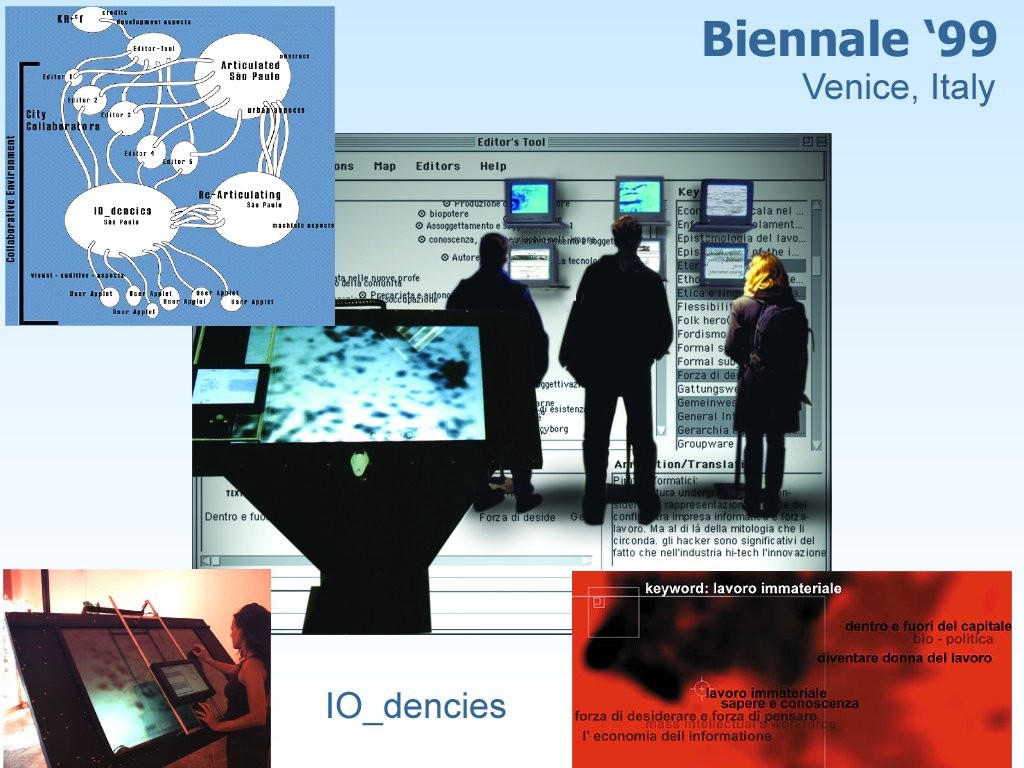 System design for a proposed virtual reality window for the Prada Tokyo “epicenter store”. Hardware and software design were conducted for the media art school Hyperwerk in Basel, Switzerland.

System design for a mobile recording studio “Statement Station” in conjunction with coaching students and at the media art school Hyperwerk in Basel, Switzerland. 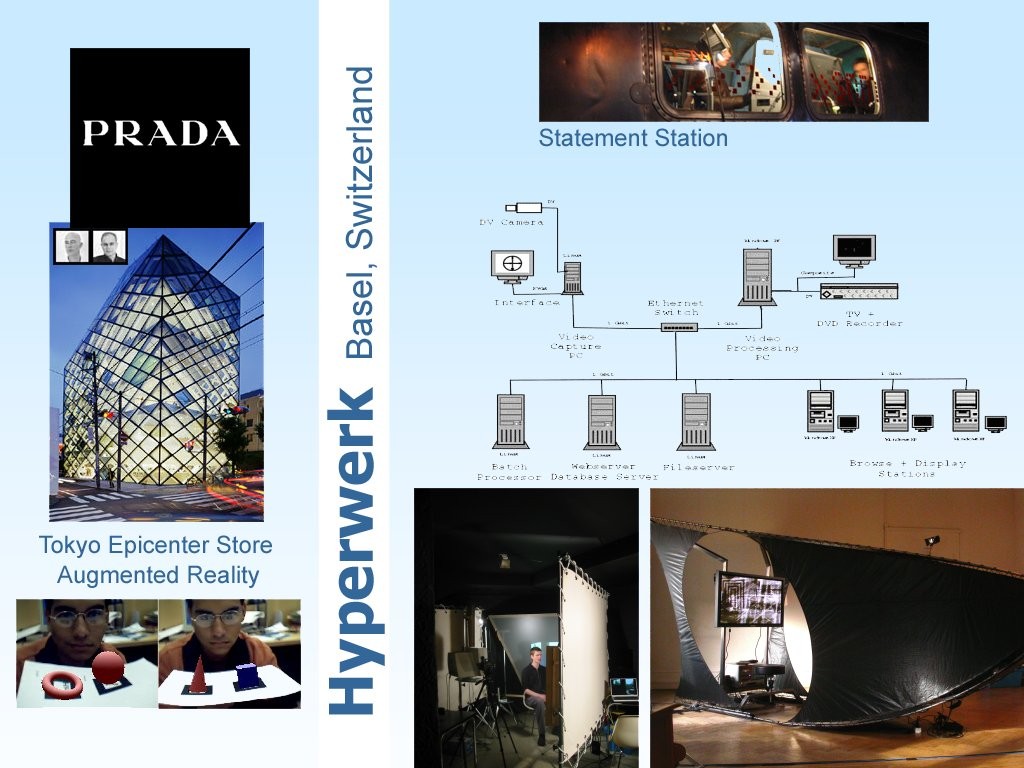 The interface to “delaygrab” and other
components of “Vergence”

The real-time “delaygrab” video processor
(part of libbgrab) at work

Contribution to an exhibition of net-art in the Center for Art and Media Technology (ZKM) in Karlsruhe, Germany. 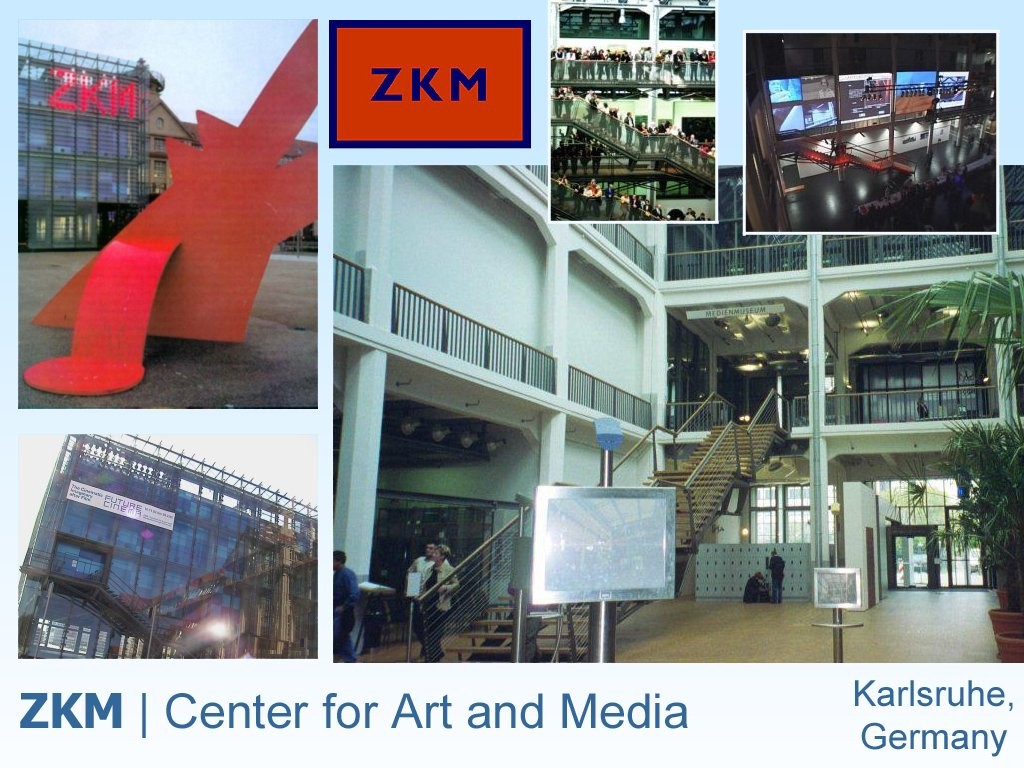 I was involved with several pieces at the net_condition exhibition at the ZKM 1999-2000. Some of my software at the show included my game FAST, asciivideo, and activity-to-MIDI sound mapping using the asciireflector.

For the ZKM installation “Digital Body Automata” a realtime “blue-screen” driver software was used to build an interactive videowall made out of 16 TVs with interactive content on 12 of the screens. System components were:
– 2x 8 TV screens arranged in a row on each side of the mural
– 5 Pentium200 PCs with 3 Matrox VGA video cards each and a Matrox Meteor framegrabber card
– 4 cameras imaging a red cloth screen below the TVs
– multiple VGA-to-TV converters, video splitters, cables, etc.
– RedHat Linux and custom X-Server that supports 3 video cards (needed at the time)

The TVs shows a cover image (stone texture). When the observer enters the space, a virtual shadow is cast onto the TVs revealing a detailed image underneath. The “shadow” is calculated from the obscured red sloth in the image path of the tiny wide-angle cameras hidden below the TVs. 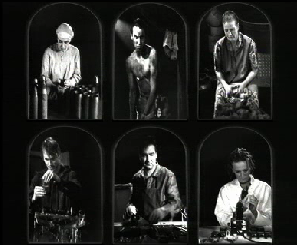 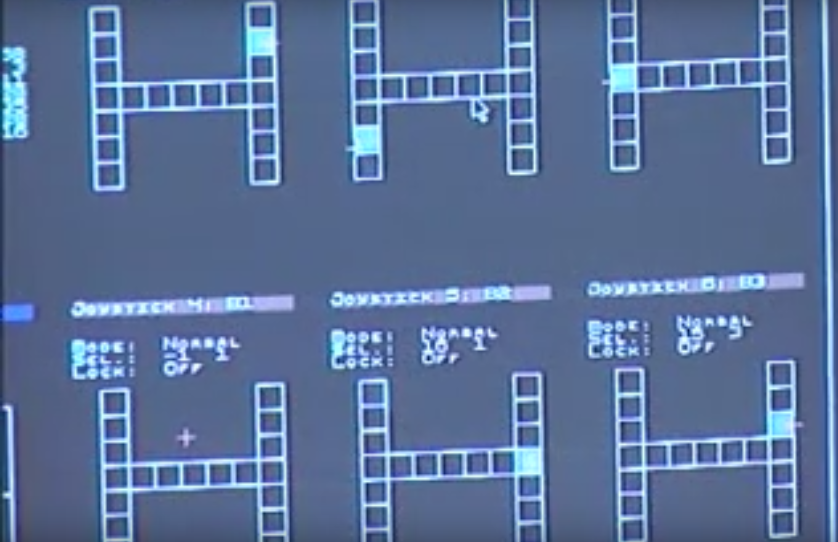 Noise-recordings of Niagara Falls with a directional mic for internet streaming and subsequent sound synthesis by distributed sites for Fusion 2001. 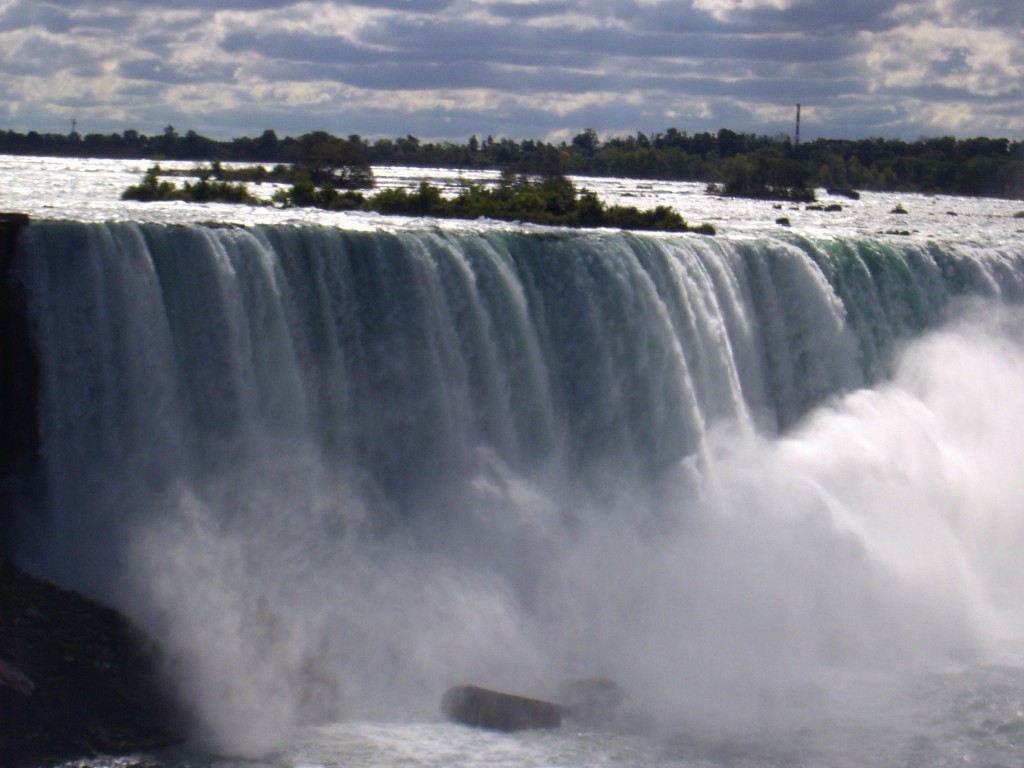 Concepts and prototypes that were created for Michael Schmitt’s 10000miles.de Project. 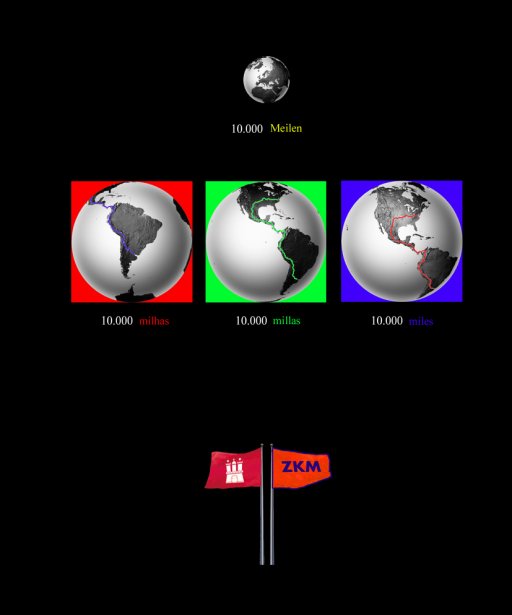 As part of the project I’ve developed some travel-oriented interactive games, including a “Suitcase” KiSS and some ASCII art.